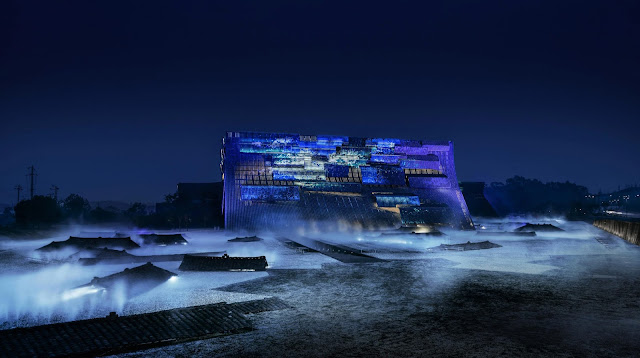 "Only Mount Emei" Drama City is located beside the main scenic area of Sichuan, Emeishan City, Sichuan Province. It is a large-scale situational experience drama created by the famous Chinese director Wang Chaoge by Emeishan Tourism Investment Development (Group) Co., Ltd. The total area of the project is about 6 hectares, including the Yunshang Performing Arts Theater, the Yunzhong Scenery Garden, and the Yunxia Scenery Theater transformed from the original villages in the base. 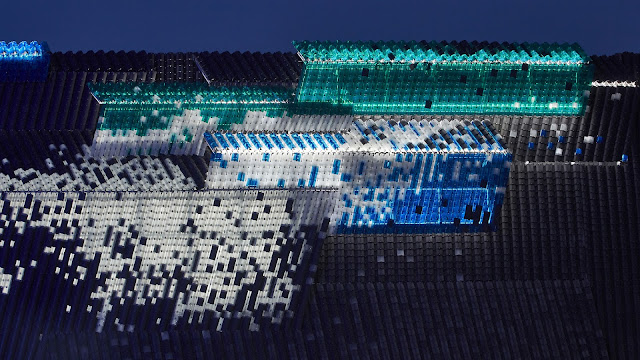 The architecture is closely related to the title "Emei" and uses "above the clouds" as the entry point for architectural context and literature. She draws on Emei and the sea of clouds, the world of Buddha and the world, distilling natural images into literary expressions, and then translating the semantics of literature into Building image.

The architecture is not a blunt existence or self-expression to the surrounding fields. It is integrated in the mountains and rivers of Emei. It is not to build a building, but to create a Chinese literati landscape painting. She may not be a traditional building in the end, but she must be a work of art with a dream scene.

The flow of time, the changes of history, the trees and rivers in the base, as well as the people who have lived here for generations, have all left marks on this land. She is like the music of the years. In order to restore all of this, all the original villages in the base were preserved, as intact as possible, and drama content in line with the theme was added. The old village and the theater sang and continued to write a new chapter.

On the architectural modeling of Yunshang Performing Arts Theater, it depicts that the building is located in Mount Emei, with its majestic southwestern spirit. At the same time, the architectural texture is emphasized in the design, with "tiles" and "roofs" as the motif elements, and a series of "roofs" are gradually spreading and covering from the surface to the wall, from bottom to top, creating an intention from the world to the heavens. And the visual transition is like looking at everything in the world from the heavens, both true and false, "above the clouds" and "the world".

The theater "Above the Clouds" looks down on the human world like the golden dome of Mount Emei; "Among the Clouds" creates a feeling of walking among the clouds through the landscape, which is a fairyland; "Below the Clouds" is transformed from a natural old village Cheng is the world. The space here is the meaning of time and space. The audience first enters the "world" and then climbs to the "world", as if approaching the top, like watching the sea of clouds, experiencing the spiritual realm "above the clouds". 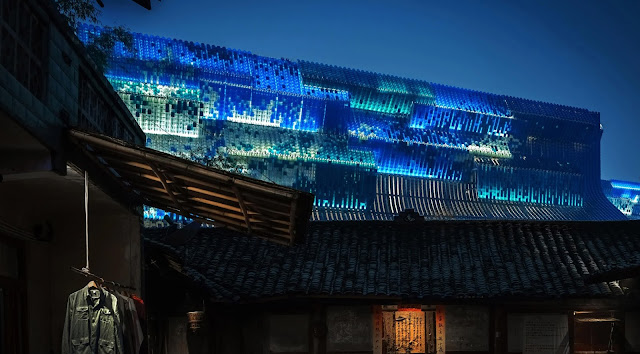 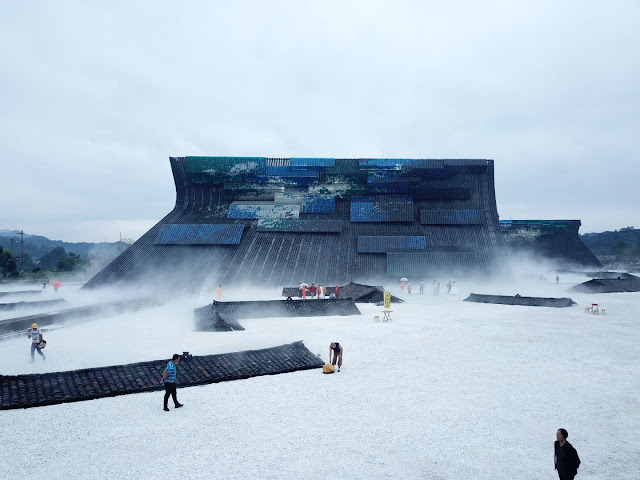 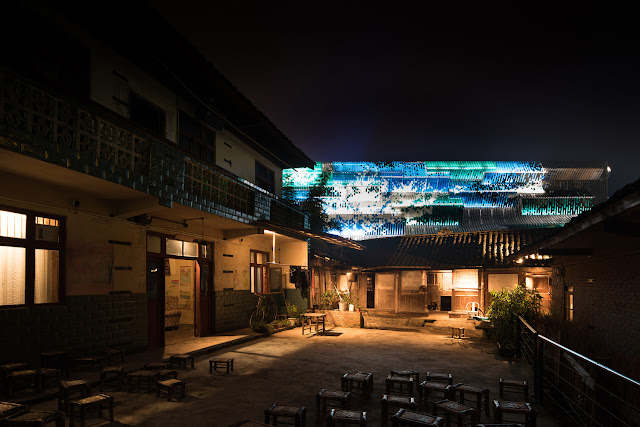 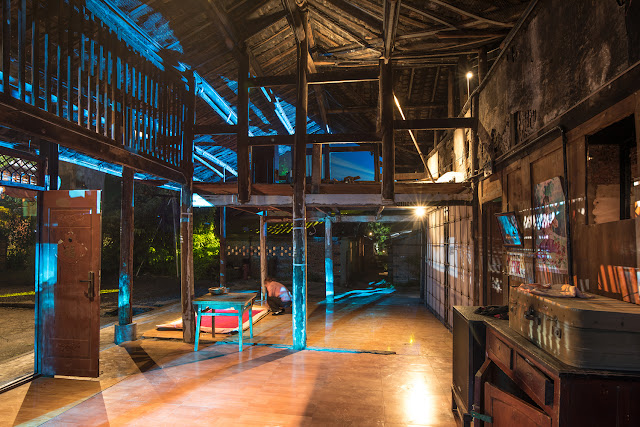 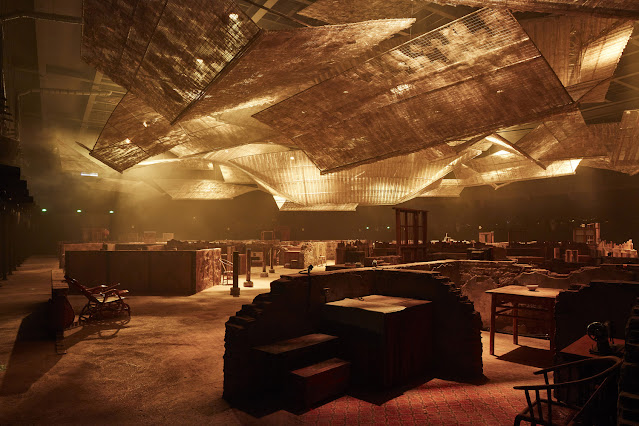 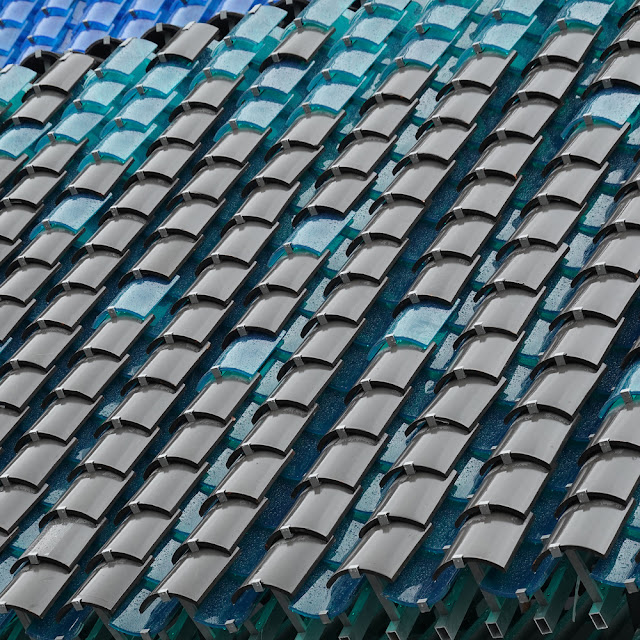 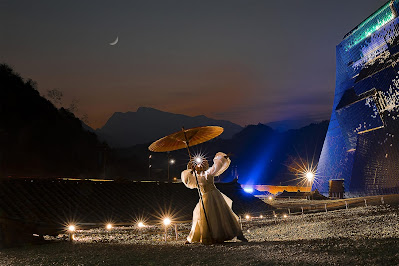 "Beijing Leuchte Lighting Design has orchestrated a lighting scheme for an open-air-thetare complex in Emeishan City, China, centred on a pavilion encrusted with 50,000 illuminated tiles.

The play, created by Chinese stage director Wang Chaoge, explores Buddhism and the history of nearby Mount Emei – one of the four sacred mountains of Chinese Buddhism.

Among them is an illuminated pavilion called Beyond the Cloud

Aside from the glowing pavilion, Beijing Leuchte Lighting Design used found objects, such as sinks, to form luminaires for the show and lit artificial mist using white lights to make the audience feel as though they are walking above the clouds.

The venue's centrepiece is Beyond the Cloud – a pavilion clad in 50,000 illuminated glass and ceramic tiles that are finished in shades of blue-green, white and grey.

Next to the pavilion, white gravel helps to delineate the second theatre location, called By the Cloud.

Throughout the courtyard, the roofs of vernacular village dwellings appear to be sunken into the ground to provide the audience with the sense of standing on top of Mount Emei – an experience that is further heightened by the hazy, cool-toned landscape lighting.

The final setting, Beneath the Cloud, takes over the old dwellings of Gaohe Village, which Wang and her team turned into an immersive performance venue.

Beijing Leuchte Lighting Design opted to adapt existing artefacts such as crockery, sinks and woven baskets to provide light sources for the performance, as opposed to specifying modern fittings."