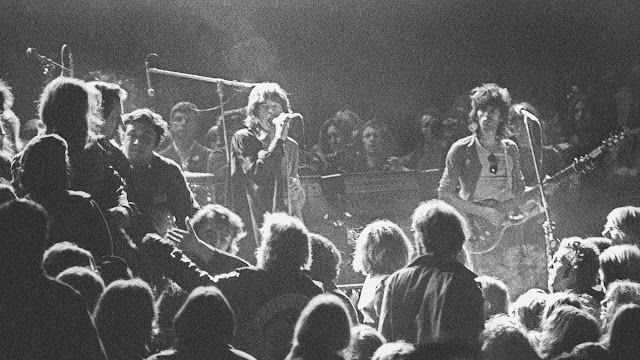 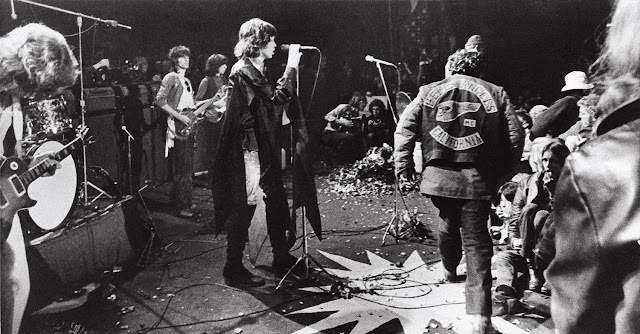 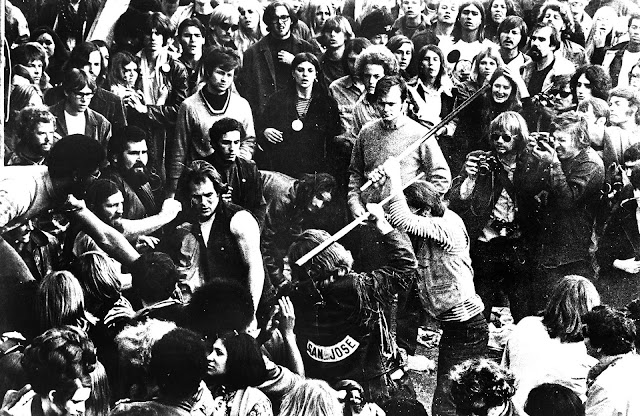 The Hells Angels, who were paid for their vague role as a disastrous informal security force with $500 of beer, left a bloody trail all day, riding their motorbikes through the crowd to the stage and beating men and women with pool cues.

The signs were there from the beginning that this was not the peaceful hippy gathering Jagger had naively hoped for. Moments after their arrival by helicopter, a young man stepped into Jagger’s path and punched him in the face, knocking him down. ‘FUCK you, Mick Jagger,’ he screamed. ‘I hate you!’
The Stones couldn’t go on in their earlier spot because bassist Bill Wyman was shopping in San Francisco and hadn’t yet arrived. By the time Wyman turned up, and the Stones began to tune up backstage, the crowd – which had no access to food or water – were wild, stoned and rabid.

‘You better get the fuck out there before the place blows,’ an Angel told Jagger. ‘You’ve tuned up enough.’
Jagger told him they were ‘preparing’ and they would go on when they were ready.
‘I’m telling you,’ said the Angel. ‘People are going to die out there. Get out there. You’ve been told.’"
from DailyMail


"The Stones channeled the emotional wreckage of the late Sixties on a song that Richards wrote in 20 minutes. The intro, strummed on an electric-acoustic guitar modeled on a Chuck Berry favorite, conjures an unparalleled aura of dread. Singer Merry Clayton brings down Armageddon with a soul-wracked wail: "Rape, murder, it's just a shot away."

Merry Clayton, was the singer of the impressive backup vocals.

"Clayton had made her name through duets and backing vocals for Ray Charles, Burt Bacharach and Elvis Presley, among many others.

She was about to go to bed when she got the producer Nitzsche’s call: “It was almost midnight. I was pregnant at the time and I thought, there’s no way in the world I’m getting out of bed to go down to some studio in the middle of the night.” But her husband, jazz saxophonist Curtis Amy, talked her into it."
from Classic Rock

“Clayton sang with such emotional force that her voice cracked. Her contributions make this an uncannily haunting song, a warning from some ancient tragic chorus, a frenzied Sibylline prophecy
“I said to myself, I’m gonna do another one… blow them out of this room.”
Unspoken in her remembrance is what the effort may have cost her. Despite giving what would become the most famous performance of her career, it turned out to be a tragic night for Clayton. Shortly after leaving the studio, she lost her baby in a miscarriage. For many years Clayton found the song too painful to hear, let alone sing.”
from OpenCulture


"If “Gimme Shelter” remains a culturally relevant song—if it atomizes some essential quality of its political moment; if it communicates an emotional reality by circumventing the listener’s analytical mind and going straight for the limbic system—then it is able to do so largely through the tension between those two voices: between the white man who wanted to perform his version of America, and the black woman who lived its reality."
from NewRepublic

"That's a kind of end-of-the-world song, really. It's apocalypse; the whole record's like that," Jagger told Rolling Stone in 1995, describing "Gimme Shelter." Like nothing else in rock & roll, the song embodies the physical experience of living through a tumultuous historical moment. It's the Stones' perfect storm: the ultimate Sixties eulogy and rock's greatest bad-trip anthem, with the gathering power of soul music and a chaotic drive to beat any punk rock. The song was born during a pounding English rainstorm. "It was just a terrible fucking day," Richards recalled. He was killing time in the apartment of English art-scene guru Robert Fraser while girlfriend Anita Pallenberg was on set making Performance, a film in which she beds down with Jagger. With chords ghosted by a droning E-note, the music radiated dread – clearly inspired by a mix of Jimmy Reed's trance-inducing blues, Richards' own romantic anxiety, and ­heroin, which he'd just begun using. It took him about 20 minutes or so to get down the basics, which were fleshed out over several sessions in London and Los Angeles during 1969.

The finished version is something entirely new for the Stones, with a slithering Watts-Wyman groove and full gospel-style backing vocals; New Orleans-born Merry Clayton was asked to sing on the track because the band's first choice, Bonnie Bramlett, was unavailable.
"Rape, murder! It's just a shot away!" like the end times were nigh. When the band played the song at Altamont, minutes before concertgoer Meredith Hunter was stabbed, the lines seemed like grim prophecy. Richards later said that his guitar fell apart during the recording, "as if by design."
from Rolling Stone - 100 Greatest Rolling Stons Songs

“You get lucky sometimes,” Keith Richards says of Gimme Shelter, the greatest song he ever wrote. "It was a shitty day. I had nothing better to do."